Warning: "continue" targeting switch is equivalent to "break". Did you mean to use "continue 2"? in /homepages/18/d308408096/htdocs/odenmotorshop/wp-content/plugins/wordfence/models/block/wfBlock.php on line 536

Warning: "continue" targeting switch is equivalent to "break". Did you mean to use "continue 2"? in /homepages/18/d308408096/htdocs/odenmotorshop/wp-content/plugins/wordfence/models/block/wfBlock.php on line 537

Warning: "continue" targeting switch is equivalent to "break". Did you mean to use "continue 2"? in /homepages/18/d308408096/htdocs/odenmotorshop/wp-content/plugins/wordfence/models/block/wfBlock.php on line 539

Warning: "continue" targeting switch is equivalent to "break". Did you mean to use "continue 2"? in /homepages/18/d308408096/htdocs/odenmotorshop/wp-content/plugins/wordfence/models/block/wfBlock.php on line 554

Warning: "continue" targeting switch is equivalent to "break". Did you mean to use "continue 2"? in /homepages/18/d308408096/htdocs/odenmotorshop/wp-content/plugins/wordfence/models/block/wfBlock.php on line 557

Warning: "continue" targeting switch is equivalent to "break". Did you mean to use "continue 2"? in /homepages/18/d308408096/htdocs/odenmotorshop/wp-content/plugins/jetpack/_inc/lib/class.media-summary.php on line 77

Warning: "continue" targeting switch is equivalent to "break". Did you mean to use "continue 2"? in /homepages/18/d308408096/htdocs/odenmotorshop/wp-content/plugins/jetpack/_inc/lib/class.media-summary.php on line 87
 bobber Archives - Oden Motor Shop
Skip to content

This is 1983 Harley-Davidson Sportster XLH 1000 was rebuilt in spring of 2014. It was converted into a “mild” hard-tail bobber with classic Army Air Core paint scheme.

The original speedo was in excess of 38,000 miles, but the rebuilt engine and aftermarket speedo have 50 miles as of this listing.

It has the standard factory four-speed transmission.

It has an S&S Super E “Shorty” carburetor, properly jetted and tuned.

This is a “mild” hard tail using struts in place of shocks: the frame is original and can be easily converted back to factor if you value comfort more than cool.

It has has a side-mounted tail-light and license plate.

It has no turn signals (other than those mounted on your shoulder, also known as your left arm).

The front and rear brake pads have more than 75% remaining, and there is no scoring on the disks.

The tires are in great shape with plenty of tread.

The battery is new and has a battery tender cable installed.

The bike is registered in Virginia with a current safety inspection and is ready to ride today.

If you’re interested in purchasing or scheduling a demo, email curtis@odenmotorshop.com.

THIS BIKE HAS BEEN SOLD!

I picked up this 1986 Honda Shadow VT1100C a few months ago and started restoring it for a bobber project. I’ve got it running now, but other projects are taking priority. This will make a great bobber, or it comes with a box of parts for complete restoration. The motor has about 52,000 miles on it, but is still running strong. It could be road-ready with solid weekend’s worth of work.

Here’s the good news:
Here’s the bad news:
While I don’t offer a warranty on any used or project bikes I sell, I’m always willing to share technical knowledge with people who purchase my bikes. If you’re local, I’m also happy to lend a hand turning a wrench on a Saturday afternoon (as long as you provide the beer).

Check out the listing on eBay. 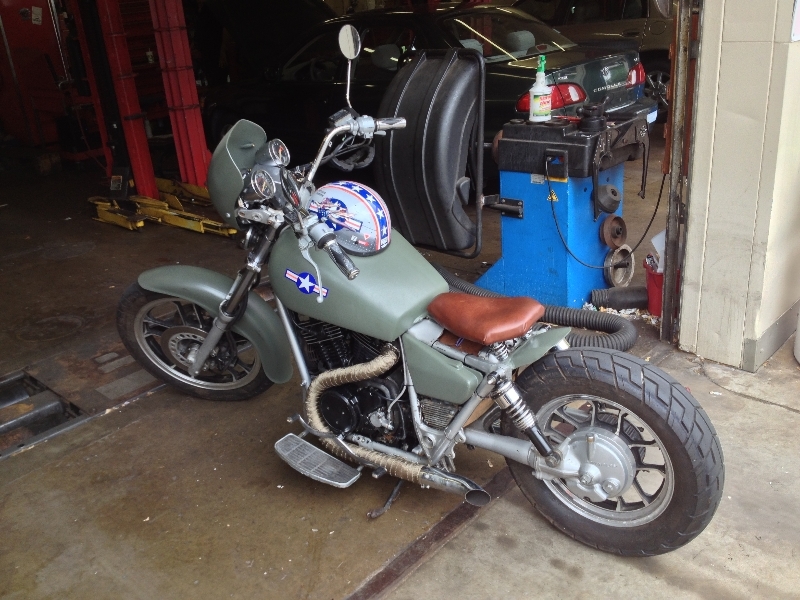 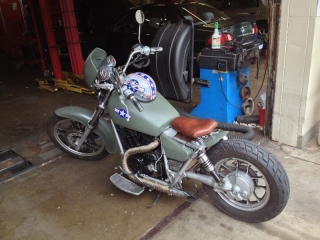 Built from a 1984 Honda Shadow VT 700C, this Army Air Core inspired bobber is a fun ride and real head turner.The bike has 40,600 plus miles, but the rock-solid, well-maintained Honda V-Twin has another 60,000 miles in it before the next overhaul. It has a new Virginia safety inspection valid until May, 2014, and is registered in Virginia with a clean title. The tires have 10,000 miles or so left in them.Over the last six months, I rebuilt the bike from the ground up. including carbs, clutch master and slave cylinders, front brake calipers, clutch, pulse generators, alternator, ignition system, and more. It has a fresh oil change, and brakes, forks, and cooling system have been recently serviced.In addition to being converted to a bobber, I’ve made the following customizations:
This bike is ready to ride today.
Check out the Honda Bobber Build Photo Gallery.

This 1984 Honda Shadow VT 700C is being rebuilt from the ground up, and then chopped back down again to create a bobber.

It’s almost time to start bolting the last pieces back together on the 1984 Honda Shadow VT 700C Bobber Project. The responses from the previous Post-Apocalyptic Zombie Bobber survey were a bit unclear, so I decided to give ya’ll a simple choice: what color should I paint this bike? Here are a few mockups, so let me know what you think. If your preferred color isn’t there, let me know, and I’ll see if i can mock it up, too!

The 1984 Honda VT 700C Bobber Project is moving along quickly. There’s still several mechanical issue that need to be resolved, but while I’m waiting on parts, I’ve decided to spend some time on the cosmetics. While this may be a rat bike, I want it to at least be a pretty rat.

I’m really on the fence right now on whether or not I should put a hacked trailer fender over the rear wheel, or if I should leave the rubber exposed (and potentially my rear end if I slide off the seat). Since I can’t seem to make the decision myself, I’ve decided to reach out to Oden Motor Shop fans to help with this age-old aesthetic dilemma: to fender, or not to feder?

Take a look at the photos of the bike mocked up with fender and without, and share your comments below. I still have the front fender on the bike, but I would like to hear opinions on that as well.


Oden Motor Shop doesn’t have much of a travel budget, so we don’t get to do the trade show circuit very often. When we do, it usually involves months of planning, loads of money, and lots of headaches. If Sturgis or Daytona are involved, there’s usually a pricey divorce shortly after. You can imagine my excitement when I learned the 2013 Progressive International Motorcycle Show was being held the first week of January in Washington, DC, right across the Potomac river from our shop in Alexandria, VA. All I had to do was find parking in downtown DC. Here is a sample of what I saw there.

After troubleshooting every other electrical component on my 1984 Honda Shadow VT700C, I determined I’m not getting spark because I have a bad pulse generator. Later model bikes use a single pulse, but the ’84 VT700C has two pulse generators, one for each cylinder. This equates to double the possibility of failure and headache cubed when one or the other it actually does fail, since they have to be replaced together as an assembly.

Finding a “new” OEM replacement proved to be impossible. At least three websites claimed to have the part, but when I spoke to a live salesperson, in each case I was told the part was discontinued and no one manufactures a replacement.

I tracked down a used pulse generator assembly on eBay. It’s amazing that idiots like me desperate enough to spend $100 for a $10 part. Since the one I picked up was the lowest priced on eBay, and since the VT700 is scrap metal without one, I considered myself lucky.

While testing the pulse generators is easy, replacing them is a pain. I had to remove the right foot controls, the right-side exhaust, part of the frame, the right crank case cover, and both the clutch inner and outer.

In the spirit of Dr. Frankenstein, I began hacking at the two assemblies, tossing the bad generators in the junk bin and cobbling the two good generators into a single pulse generator assembly.

When I began routing the pulse generator wiring back through the crankcase, I discovered I had shorted one cable by half an inch. Clearances are tight in the crank case, with the wiring routed around several moving parts, so that half inch may as well have been a mile.

This assembly arrived two days later. Both pulse generators tested within specifications, and it routed perfectly into the crankcase.

Now it’s time to button this thing up and see if we have spark.